Eight years ago I visited lovely Luang Prabang in Laos for the first time. Ever since I wanted to go back, and now I was there, for four days, as part of a month’s tour in northern Thailand, Laos and eastern Cambodia.

But things don’t always turn out as planned: I fell ill. However, this gave me ample opportunity to explore the residential surroundings of the hotel, something that otherwise might not have happened.

Just opposite the hotel there was a small temple. My guide Phak had been a novice himself in a Luang Prabang temple for two years, and knew all about daily schedules and monastic life. Not feeling like heading into town, I asked him if I could attend the evening chanting. He went inside to find someone to ask, and came back with a positive reply: I was most welcome, and I should be there just before 6 pm.

In the end I did find an unlocked door and stepped in. There was no one inside either, just the gilded buddhas.

The stillness and silence were almost overwhelming. I tiptoed around (walking didn’t seem quite adequate), observing the elaborate decorations.

It was now well past 6pm. Maybe the chanting had taken place earlier? Could it have been cancelled or moved to another temple? I was thinking of going back to the hotel when I heard a sound behind me, and there finally a monk appeared.

He gestured to me to come towards him and sit down in front of him. He found a tray filled with short pieces of yarn and started saying a long prayer while tying a piece of orange yarn around my wrist. It was a true blessing and I felt that I was really welcome.

Now finally there was some activity: it was time to summon monks and novices to the evening prayers by sounding the gong.

The evening prayers started with only three monks present.

Then a few more dropped in, and later still two or three more, while the chanting was ongoing, totally undisturbed. No one seemed to notice these late drop-ins. 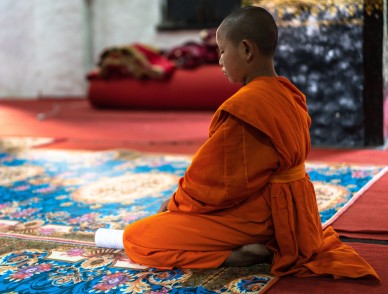 Nobody took any notice at all of me, it was as though I wasn’t there, in spite of the fact that I was tiptoeing around and crawling on the floor next to them with my camera.

But I wasn’t there only to take photos, I was there to experience a small part of the monks’ daily life. And it was something very special to sit there on the floor, next to them, their chanting filling the temple.

It was an enchanting chanting.