Every day in Cambodia my fantastic guide Len brought me to visit something or someone out of the ordinary.

On this particular day during our stay in Mondulkiri, a province in the eastern part of the country, Len wanted me to meet some ladies of the Pnong ethnic minority. It was a very hot day.

We didn’t have to drive far from the province capital of Sen Monorom to reach their small village. It seemed totally empty except for some pigs, but a young girl emerged from around a corner and from her we learned that everyone was out working. She showed us the way down a path towards the rice fields and the first one we saw there was one of Len’s friends.

She stopped her hard work of digging up old rice plants from the dry and dusty paddy and greeted us warmly. I handed her a toothbrush and some toothpaste that I had brought, and she looked at me, a little worried: “But I don’t have anything to give to you“.

Soon the lady’s little daughter appeared from nowhere (accompanied by two very small dogs). We had brought some biscuits to be shared among the village children, and while her mother continued working, the girl tried hard to get into the difficult packaging. 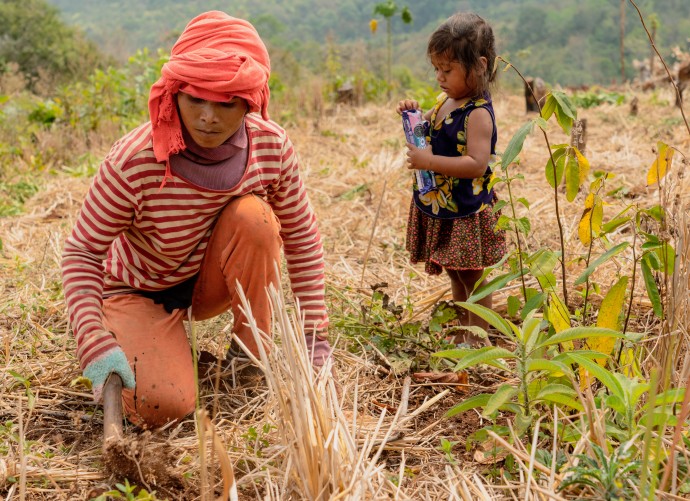 She must have succeeded though because all of a sudden she had chocolate smeared around her mouth and now she was thirsty. Whether this was a result of the chocolate biscuits or the heat, or a combination of the two, I don’t know, but the water in the plastic bottle wasn’t enough, or maybe the bottle was empty in the first place.

In any case plastic bottles aren’t the best containers for water when it’s so hot. A gourd is much better, it keeps the water nice and cool – but it’s a little tricky to hold it when you have small hands 🙂

It was now time for the midday break, but before heading back to the village, perhaps a smoke? But nobody had matches and little did it seem to matter. I don’t think she was a smoker at all.

Although we couldn’t communicate verbally I felt very much at ease in the company of this lady. My visit had interrupted her work, but she made me feel so welcome in her rice paddy.

It’s a friend whose name I don’t know.