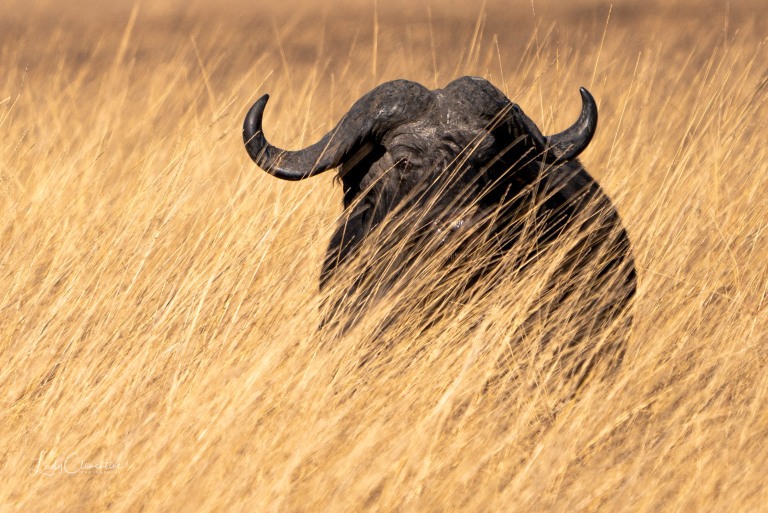 Where were all the animals?? It was a very calm morning, quite chilly, in the Busanga Plains in the Kafue National Park, Zambia. We saw some birds, passed the odd grazing antelope, but the usual numbers just weren’t there. In the distance there was a lone buffalo (actually the first we had seen up in Busanga), but wait! There is something strange, the buffalo is sort of dancing and … there is something on it, something yellowish – a lion!!!

Our guide John D headed towards the scene at top speed, and this is what we saw:

To our surprise, in the middle of this, John D quietly left his seat and went to the back of the jeep (with the jeep between himself and the animals, it should be added). We started hearing rattling noises and soon understood that he was preparing our coffee break!!

So it was with a coffee mug in hand that we witnessed the last act of this morning drama.

The lions seemed a bit overwhelmed, there was no more display of force. Instead it all came to a stand-off: some of the lions parked themselves in the grass in front of the buffalo (can you spot them?):

The others rested in the shade:

We finished our coffee, the stand-off continued, the lions slowly seemed to give up, albeit it hesitantly, the buffalo was just waiting for the lions to drop off, and we decided to leave the scene.

But we hadn’t been the only ones to witness it all: the constant buffalo companion the oxpecker was around, completely oblivious to the drama that had been unfolding.

This all happened when on a safari in the J&M Safaris Musekese and Ntemwa camps. The trip was organised by Africa Travel Resource.