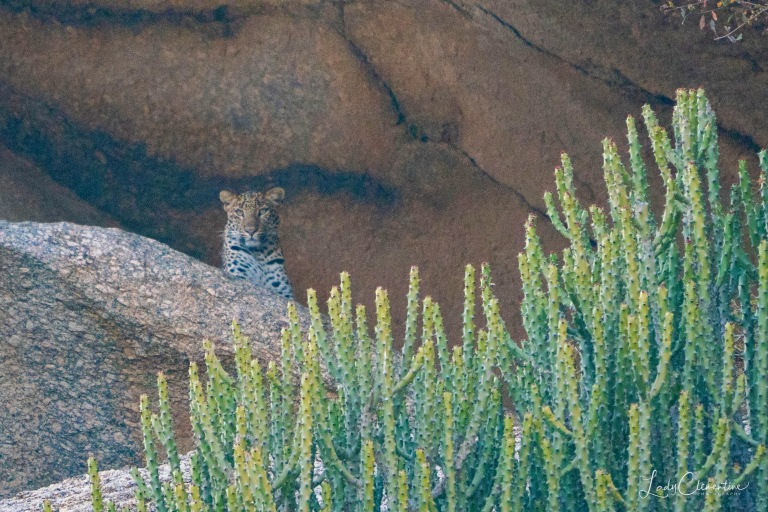 Everyone knows that there are tigers in India, not so many anymore, alas, but still. There are also leopards, a population that is threatened and protected, but which counts rather much higher numbers than the tiny tiger population.

My trip to Rajasthan in February 2020 was mostly focussed on culture, but two days of safari were included, two days on the lookout for leopards in the Jawai Bandh Leopard Reserve. I stayed in the absolutely wonderful Sujan Jawai camp, where everyone assured me that I would meet leopards, it was almost guaranteed, they said.

So it was with great excitement that I headed out with my knowledgeable guide SP. And indeed it wasn’t long until we stopped in front of a cliff and he said “Look up there, I think it is Fenella”. I didn’t see a thing, in spite of my excellent binoculars. But then yes!! There was a tiny spot up there and it was moving! SP looked again and confirmed that it was the female they have named Fenella.

As the sun set Fenella decided to move downhill and come a little closer to us, but she was still rather far away.

SP quickly turned the jeep and headed in the direction he thought Fenella would go. And there she was! Just next to us! What a beauty …

The next day we saw leopards again, and in the morning the day after that too. But how well camouflaged they are. And so elusive. They look in your direction for a brief moment, then decide to go into hiding or simply get on with their business. We never got as close to them as we had with Fenella – all photos below were taken with my 400 mm lens.

In this area the leopards live very close to villages, but the local Rabari herdsmen and the big cats seem to live in symbiosis: people are left alone, and the people leave the leopards alone. Occasionally the villagers will lose a calf or a goat to a hungry leopard, but the government will compensate them for the loss.

When I took the photo below, we had just spotted a leopard a couple of hundred meters away when we came across this big herd of potential leopard dinner, but neither the sheep nor the herdsman showed any sign of being on the alert.