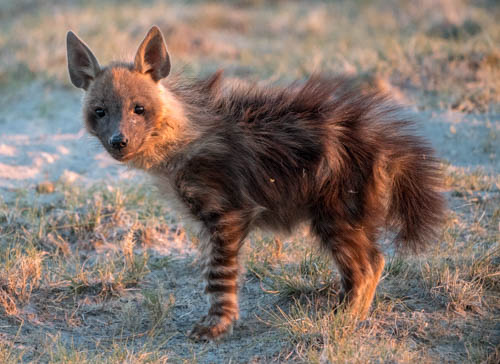 If you lose your mobile phone during a game drive in the Kalahari wilderness, where you have been driving off track most of the time, what are the odds that it will ever be found again? One of my fellow travellers lost his phone under such circumstances, but he took it very philosophically, simply resigning himself to the fact that it had happened.

One of our guides, Dabi, insisted on going looking for the phone, in spite of everyone saying that it would be pointless. But he wouldn’t listen and just took off in the jeep. We couldn’t believe our eyes when he came back after a couple of hours with the phone in his hand. This highly skilled animal tracker had now proven to be an equally skilled phone tracker. Unbelievable. This was the first miracle.

Before coming to the Kalahari, our group of photo enthusiasts had visited the Okavango delta. We had been very lucky there: we had seen one little leopard cub and six lion cubs in two litters of three (see previous blog posts). With so much luck, could we really hope for more cub spotting? Not really.

Close to our camp, Camp Kalahari, a brown hyena, a rare animal, an endangered species, had been seen. The brown hyena is a cute animal (yes, hyenas can also be cute), with thick longish fur and striped legs. We set out for the afternoon game drive to try to find this hyena, all a little excited. And after a few minutes, there it was! Right in front of the jeep! I gasped for air as I saw a female getting a cub out of the den!

We stayed put watching  as the sun was setting: the cub had its meal, it played with its mother, annoying her a little at times, and it started exploring the neighbourhood, watching us, coming closer, surely wondering what the excitement in those two jeeps was all about.

Witnessing all this was the second miracle.

The brown hyena is now one of my favourite animals. How is it possible not to love a creature with striped legs?