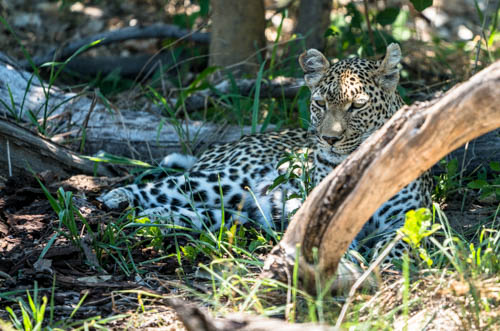 Help! The jeep suddenly veered off the track and headed straight into the bush. It looked a little like this, but denser:

Logs broke underneath the jeep, branches cracked against its sides, branches and leaves bounced as our guide navigated the vehicle with great determination. It was the first morning of my first real safari, and I was in Botswana, in the Khwai private concession.

I was very excited.

But what was the destination of this off-road expedition? We stopped in front of a hollow log and were asked to be very quiet. And then we saw a tail, a spotted tail, a leopard tail! Inside the log!! Never before had a tail caused such excitement and been the object of so many photos (I was with a group of Swedish photo enthusiasts).

But those small spots …? There was also a cub! The excitement reached new heights. I’m not ashamed to admit that tears started filling my eyes: here I was, on the first morning of my first safari, sitting a couple of metres from a leopard cub!

We waited very patiently for a while, but mother and cub didn’t come out. We decided to come back later and headed towards new morning adventures that brought more tears of happiness to my eyes (I mention this just to make you curious and alert for upcoming posts).

We all held our breath as we headed into the bush a few hours later: would we see more than a tail? The reply was very soon very obvious:

And as if this beautiful sight of a proud and vigilant mother wasn’t enough (notice how one of her ears is listening in to something), the spotted little creature was now quite visible inside its home:

Our guides told us that the cub must be less than eight days old since it hadn’t yet opened its eyes. We were in awe.