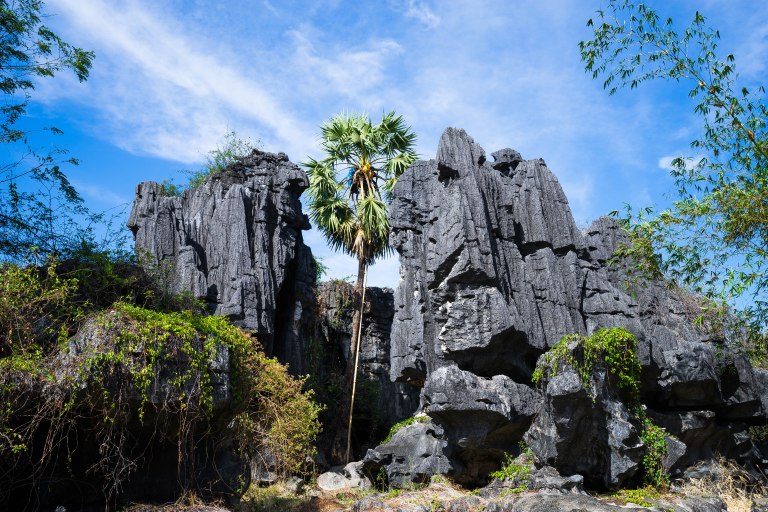 We stop here, said the guide.

On both sides of the road there were only rice paddies, no roads, no paths. From a solitary house in the distance came loud music. They were preparing for a wedding, the guide said. We headed straight into the rice paddies, the goal being some very old graffiti: the guide mumbled something about 5,000 years (but I might have got it wrong (he was very soft-spoken) or he might have messed up the numbers in English); two other tourists that we met (Danish birdwatchers) said that it wasn’t every day that you saw cave paintings 95,000 years old. It appears that the truth lies somewhere in between: the cave paintings go back some 40,000 years, which is impressive enough.

The method used had been to spray blood through bamboo tubes towards a hand held against the wall.

The walk took us through a lush landscape with spectacular karst formations jutting out of the rice fields.

Lunch was served on a terrace, but since there are no restaurants in the area, we were received in a family home.

The lunch was digested during a short trip, but what a beautiful trip!, through calm river waters in a Very Small canoe (the vessel on the right in the right-hand photo here below). I thought I was fairly agile (especially given my age), but climbing out from the bottom of said canoe, with a camera around my neck and a backpack, without tipping the canoe over, and hauling myself high up onto the little platform that served as boat stop/waiting room proved to be a true challenge. I made it.

This was just another day in southern Sulawesi.